Flutter is an open-source UI software development kit, A Google product, used to create applications for cross-platform. Deploying the same business logic and maintaining the same app functionality throughout different platforms is made easy through Flutter.
At Conquerors, we specialized in Flutter development services, with 10 years of experience as the Leading Flutter App Development Company in Hyderabad, using an advanced skill set, we are crafting great performance-based and robust-based Flutter Applications on par with international standards.
Table of Contents:
1. Introduction to Flutter
2. Flutter Application Development

2.1 Moving forward with Conquerors
2.2 Flutter and its share in the market
2.3 Factors that make Flutter more effective
2.4 Flutter 3.0 improvements

3. 11 Most popular Flutter applications across the world

At Conquerors, we are specialized in Flutter development services, with 10 years of experience as the Leading Flutter App Development Company in Hyderabad, using an advanced skill set, we are crafting great performance-based and robust-based Flutter Applications on par with international standards.

The Flutter framework is relatively small; It is an open-source UI software development kit, A Google product, used to create applications for both Android and iOS. can achieve the order to develop cross-platform applications on Android, ios, macOS, Linux, and Windows through the Dart programming language in the development of Flutter applications. Around 39% of the market share is taken by Flutter in 2022.

The advantages we get in developing an application through Flutter implementation is a very effective process, where the below-mentioned points play an important role in better App development.

Platform connectivity is achieved by Flutter across multiple platforms like  Android, ios, macOS, Linux, and Windows, through which Flutter spreads its environment throughout different applications.

Flutter’s customized animation support makes it easy to implement a variety of animation types in detail. Different approaches are possible to easy animated customization. There are many widgets and functionality available to develop motion effects. For example Material widgets.

4. The same business logic code base for different platforms:

The important feature of Flutter comes along with a multitude of benefits where the code base is the same for all platforms. Adding native performance for upgraded versions gives an immense effect to maintain its quality very effectively and simultaneous application upgrades on iOS and Android.

Flutter is Fast in code development due to the hot reload feature, which provides seeing the changes applied almost instantly, not losing the current application state. So this feature makes Flutter many times faster and development time will be far less comparatively. Due to the fast development Increased time to market speed will be rapidly high.

6. Difference between Flutter and React Native:

In order to paint your UI  Dart programming Compatibility brings it to life, There are many features that make it possible. Mature and event-driven code brings complete async-await for user interfaces. Open source, Developed by Google, Its Object Oriented functionality brings most of the development in less time. 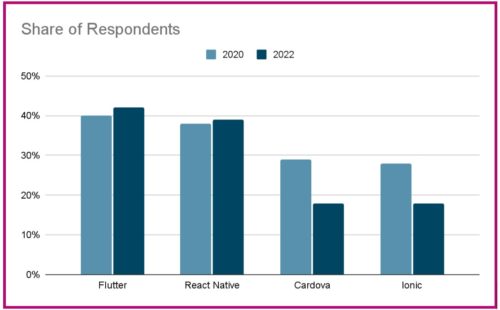 Google released the new version of Flutter 3.0 on May 11, 2022, and different features updates are as follows:

Flutter now supports variable refresh rates on iOS devices with display promotions, which include iPhone 13 and iPad Pro. Now Flutter apps can render refresh rates reaching 120 Hz before it was relatively very low which results in a smooth animation process.

Flutter needs more memory expenditure than native whereas native apps are considered to be efficient in memory consumption, In Flutter 3.0 updates the performance improved rapidly as it is now similar to native application performance.

11 Most popular Flutter applications across the world

The most popular creation of Flutter Application Development is the Google Ads application. Google Ads is a product used to create Ad campaigns, and help sell products or services, it is a powerful advertisement platform, also used to increase traffic to your website. Google Ad accounts functions are online manageable so the creation and change of ad campaigns are possible at any time.

A famous name in the e-commerce market is the B2B marketing application UI/UX a, easy to use and saving on time.

This is an intelligent journal, a very interactive app, with inbuilt artificial intelligence functionality to help the users review their daily thoughts and problems.

Which is an Android application that helps to maintain a count for the amount of water intake, through which we can set the goals and alerts to improve and maintain water intake.

Hamilton musical play store is an official app developed using Flutter, It tries to fulfill all the Fan’s requirements so Fans can stay in touch along with new updates.

Being a fitness, health, and meditation app, Coach me is an application that shows the diverse functioning of flutter in different industries. This app helps the user in their personal well-being.

This is Tesla’s space unit app. The current and upcoming events include ships, vehicles, information launches, and about Tesla. The app features are customized and easy to navigate.

This app was built for story editing on Instagram, by which users can enjoy stunning templates from typography and frames and it provides options to customize the user stories.

This is a navigation app where the different buses’ information is stored along with departure and arrival times. using which a user can get the details quickly, Fast application developed by Flutter because updates are very frequent.

It depends on the bitcoin market in-order to maintain and manage a cryptocurrency investment portfolio for the user, this is the best app developed using Flutter.

3. What are different Tools used to develop Flutter applications?

4. What are the benefits of Flutter Applications Development?

5. What is the Language used in Flutter Application Development?

Dart is the programming language developed by Google used for Flutter Application development, which is open source, object-oriented, class-based, modern, and with C-style syntax.

6. What are the types of Widgets in Flutter?

Widgets consider to be units of composition, In the Flutter framework Widgets are the central class hierarchy. As a part of a user interface, a widget is an immutable description. Widgets themselves have no mutable state. There are two types of widgets, 1. Stateless Widgets and 2. Stateful Widgets.

7. What is the difference between Stateless widgets and Stateful widgets?

A stateless widget cannot change the state at the runtime of a Flutter application until an event occurs.

Whereas stateful widgets can be changed dynamically at run time because these are dynamic in nature. It contains setState().

8. How much does the amount need to spend on developing a Flutter Application?

9. How much time taken to develop a Flutter application?

Depending on application complexity Flutter application development takes around 4 to 6 months or even up to 1 year.

10. What is Flutter Framework?

In order to bring splash into the mobile application development, we need to dig into Flutter Framework. Which contains SDK and its widgets-based UI libraries. these libraries contain text inputs buttons etc.

11. What are Dart packages?

For better performance and fast code development and execution, the Dart virtual machine used to achieve both Just-in-time and Ahead-of-time compilers.

14. What does Flutter IDE do all about?

Developing any mobile application using Flutter IDE and tools requires some plugins. Using these plugins we do a compilation of Dart programming, next we analyze code and develop Flutter

The Above mentioned are two popular and powerful IDEs of Flutter.

15. Does the process involve building a Flutter application?

For the first time, if you are trying to build a Flutter application, it takes much longer time than usual, because Flutter creates an Apk or IPA file which is device-specific, whereas Xcode and Gradle are used to build a file. Which itself takes a longer time.

16. What is the testing process for any Flutter application?

There are three types of test processes that will be usually performed on any of the testing processes of a Flutter application.

17. What is Stream Controller in Flutter and Dart?

As the word specifies Stream Controller is the place where the stream listens and responds to information in the form of events.

There are two Asynchronous event exits in this controller

18. What are Streams in Flutter and Dart?

Asynchronous events delivered sequentially are said to be Streams,

There are two types of streams in Flutter those are :

19. What are Sinks in Flutter and Dart?

Both streams and sinks are said to be the backbone. the sink is just like a stream that flows in the opposite direction, EventSink operates by adding data events into a connected stream Automatic creation of stream and sink.

20. How we can achieve smooth animation while developing the Flutter Application?

Flutter provides different animation widgets to give great smooth animation on cross-platforms, This process can be achieved implicitly and even explicitly, Some of the animated widgets are given below.

21. What are the different features of Flutter 3.0?

The web app life cycle is one of the features added in Flutter 3.0, Firebase is a backend-as-a-service application development platform that can find new features, iOS Variable Refresh Rate Support, etc.